A hundred years ago, a simple farmer named George Perry caught the biggest largemouth bass on the record. The monster weighed 22.3 lbs (10.1 kg) and fiercely fought the apprentice fisherman until its last breath. Catching such a trophy is every fisherman’s dream, but how long does it take for this species to reach this size?

Largemouth bass can grow as fast as 2lbs (0.9kg) in the first year, but their annual growth decreases to 0.5lbs (0.2kg) in subsequent years. This growth rate is correlated with optimal environmental factors. Gender, weather, habitat, and food supply will also influence these fish’s annual growth.

But even at this optimal growth rate, reaching the size of George Perry’s beast would take about…41 years! Could this fishing feat ever be replicated, or was this giant a unique catch in human history? Let’s find out by digging deeper into the factors contributing to the largemouth growth, including environmental conditions, food supply, and species characteristics.

How Environmental Factors Influence the Growth of Largemouth Bass

A few environmental conditions need to be reunited to benefit the largemouth bass optimal growth.

Let’s take a look at the most critical factors that affect the growth rate of this species.

Water temperature plays the most important role in the growth of the largemouth bass.

But depending on the life stage of the largemouth bass, water temperature requirements differ:

In colder environments, the rapid growth of the fry is indispensable for their survival. If they get through their first winter, their growth will be positively correlated with water temperature during the hottest months of the year (June-August).

Here, you can take a look at the figure below, which clearly shows the relationship between temperature and growth rate of the largemouth bass: 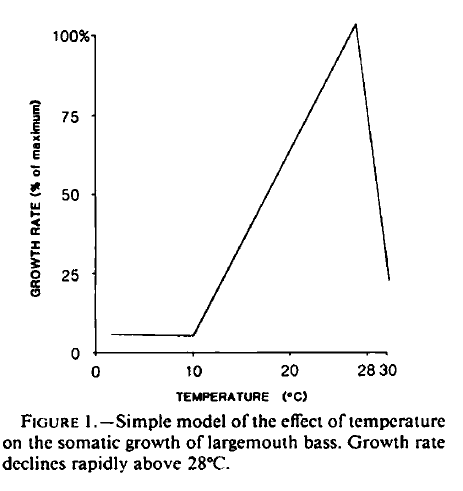 However, keep in mind that these optimal water temperature ranges may not be met in all lakes inhabited by largemouth bass. Temperature and winter duration, combined with factors such as habitat requirements and food availability, will strongly influence the growth of largemouth bass.

This leads to the second and third most important factors in the growth rate of this species.

The largemouth bass is native to North America -United States, Canada, and northern Mexico- but has also been introduced to other parts of the world. They reside in all types of water -swamps, ponds, lakes, reservoirs, streams, estuaries, and large rivers.

They grow faster in new lakes than in old ones and prefer larger ponds of water to small ones. Habitats favoring the rapid growth of largemouth bass have low current and moderate water clarity. Indeed, largemouth bass prefer shaded areas and seek protection from light at all stages of their life.

The best lakes for finding largemouth bass have shallow shoreline areas and lots of submerged vegetation. For example, the largemouth bass of Sammamish Lake, in the state of Washington, thrives in shallow water, where there is a lot of aquatic vegetation and silt and sand substrate.

As mentioned above, the growth rate is generally faster in large bodies of water than in small ones. This is because of the density and food intake that can be found in larger bodies of water.

The growth of largemouth bass is also very dependent on population density.

Let’s take a lake where we find an abundance (density) of fish of the same species. They will have to compete with each other to be able to feed themselves adequately. On the other hand, if the fish density is low, the competition will be less fierce, there will be more food, and the growth rate will inevitably be faster. The maximum sizes will also be higher.

There are two subspecies of the largemouth bass: the Northern and Florida strain.

Northern subspecies are generally found in the Great Lakes, Mississippi, Florida, and coastal watersheds from Georgia to Virginia. The Florida subspecies are located in Florida and parts of Georgia.

Northern largemouth bass will rarely reach more than 10 lbs (4.5 kg), while Florida bass can potentially reach 20 lbs (9.1 kg) or more. The two subspecies have a similar growth rate during their first three years. Still, the Florida largemouth will exceed the growth rate of the Northern subspecies after that.

Another difference between the two subspecies is tolerance to cold water. The Northern largemouth is cold acclimatized and can even be caught by ice fishermen. The Florida strain is unable to survive prolonged periods of cold water.

Another characteristic that influences growth rate is the gender of largemouth bass.

Growth rates vary widely between males and females, but females are generally larger than males. They also tend to live longer.

Since males mature faster, breeding pairs often consist of a smaller male and a larger female.

Females of the Florida strain also tend to grow at a rate correlated with a warm climate. Still, males exhibit a growth rate approximately that of a population of the Northern strain.

How To Tell the Age of a Largemouth Bass

Now that you know the main factors contributing to the largemouth bass growth, you might be wondering how to determine the age of the monster you just caught.

There are two ways to find out (and one is slightly more accurate than the other).

The first method is to count the number of annuli on the scales of the largemouth. But what exactly are annuli? Think about the growth rings in the trees.

Indeed, determining the age of a fish is similar to aging a tree -you just need to count the number of rings. In the case of fish, the growth rings are called annuli, and the spacing between the rings is proportional to the fish’s growth. To do that, you can follow this simple procedure:

However, even if this method is relatively straightforward and non-lethal, it is not the most accurate.

Look for the Otolith

Another way to estimate the age of the largemouth is by removing the otolith (ear bone).

The otolith has annual growth bands, which allows determining the age of the fish more accurately. However, be aware that the fish also needs to be sacrificed to retrieve the otolith, which is not the case with the annuli method.

Even if you become a master at determining your fish’s age, don’t expect to catch a 41- year-old largemouth bass anytime soon. Indeed, biologists estimate that the average life expectancy of bass is 10 to 16 years.

George Perry’s beast was either a dinosaur or a largemouth that grew tremendously during its lifetime. Either way, keep in mind that the average size of largemouth is 12.1 lbs (5.5 kg), which is still considered a trophy bass!

Under the best conditions, largemouth bass grows fast and well. Hitting two pounds in the first year is indeed impressive. Still, this optimal growth rate is heavily influenced by various factors, such as:

In all cases, the growth rate is highest in the first year and decreases each year after that.

8 Reasons Why Bass Fishing Is So Popular
How To Set a Hook for Bass Fishing: 9 Tips
How To Become a Professional Bass Fisherman: Complete Guide
How to Bass Fish in the Winter

link to 6 Bass Fishing Techniques All Anglers Should Know

Photo Credit - @smallmouth_addiction Regardless of your skill level or whether you're a tournament angler or a weekend angler, learning the best bass fishing techniques can help you maximize your...

Continue Reading
link to What To Do When Bass Won’t Bite: 10 Tips

Photo Credit - @wyattsreelfishing Even the most experienced anglers can occasionally struggle to get a bass to bite. While this can be a frustrating situation, there are quite a few things anglers...

My name is Doug and I have had a passion for fishing and many other outdoor activities ever sense 1992, I was 12.
I hope that I can pass some of my fishing and boating knowledge to anyone that wants to learn.